, "Proof Adduced for the Complainers, in the Petition and Complaint At the instance of George Anderson, Thomas Anderson, Henry Hodge, John Anderson, Patrick Hodge, Patrick Coldstream, John Stark, Captain James Paterson, John Henderson, and William Balmano, all of them Counsellors of the Borough of Crail, and constituent Members, either of the Meeting for the Election of Counsellors, and Leeting for the Election of Magistrates, or of the Meeting for Election of Magistrates of that Borough, at Michaelmas 1765; against James Stephen, Andrew Jamieson, and others, pretended Bailies, Treasurer, Conveener of the Trades, and Counsellors of the said Borough of Crail, relative to the Election of Magistrates and Counsellors of the said Borough, made at Michaelmas 1765, taken in consequence of the following Interlocutors of the Lords of Council and Session," 16 Jan 1766 , Scottish Court of Session Digital Archive Project. Charlottesville: University of Virginia Law Library, 2015-2019. 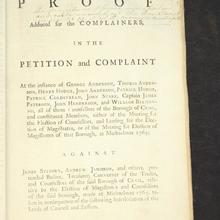 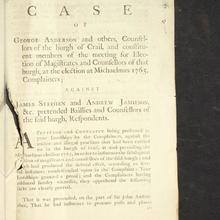